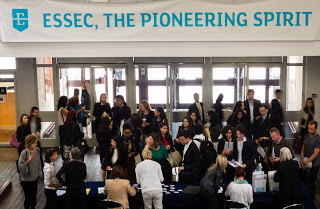 I am just completing my first week of classes of the ESSEC Global MBA program, class of 2016. Though I thought that I would be in a class of only 32 other students, I was pleased to find that there is overlap with the Luxury and Hospitality MBAs, which combined add around 100 additional students to our immediate network. Meeting them has already been eye-opening and they come from all countries and backgrounds.

Our first day included a catered meet-and-greet with wine, where the three MBA programs mingled. Just a sample of the people I’ve met include a Japanese man who used to work in renewable energy throughout Asia pacific, a French woman who worked at L'Oréal in product development, and an Indian man who worked in Bollywood.  So far, every person I’ve met has been very interesting and I’m excited to get to know them better. 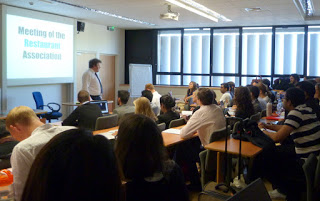 Our orientation was a full day of getting to know the campus, students and faculty. A few professors  gave speeches. Some revealed a colorful sense of humor and all set the pace for the program, which will be short and incredibly intense. As Professor Peter O’Connor said, we’ll work hard, fail sometimes, succeed others, and undoubtedly form close friendships with our classmates.


After one day of orientation, we were thrown into our first class, aptly named CRASE. You may be familiar with it, the Cornell Restaurant Administration Simulation Exercise (CRASE). It’s a week-long simulation designed to let students fall head first into the dining marketplace to see if they can run a successful restaurant, or at least not make one go bankrupt. 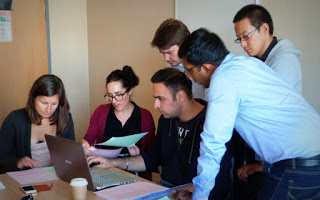 As someone who came from the non-profit sector, I thought that I would not have much to contribute especially since many students have a background in hospitality. But we quickly learned, no one is prepared and that’s the point! We are learning by failing, you could say. The premise is simple, there are 8 restaurants in a town, taken over by 8 student groups. We must reinvent the business strategy in order to succeed under realistic market conditions. For example, some will fight to capture the low-cost fast food segments while others will vie for the high-end market and of course everything in-between. It’s a challenge to say the least! Within our small groups, leaders, calculation wizzes, and marketing experts have emerged. My team asked me to present our findings to the class, so now I have my first presentation under my belt. It’s certainly the most fun way to learn how an income statement functions and to understand all the factors that make a restaurant succeed or fail!

The energy and enthusiasm level is high and so is the anticipation for the next week, when we’ll head to Saint-Cry, a French military school, where we will complete obstacle courses, sleep in barracks, and awake our inner leaders. I’ll keep you posted as class of 2015 completes the MBA journey!
Posted by Anonymous