Our field trip to Morocco: Away from stereotypes and deep into inspiring leadership

Any celebrity worth their salt supports a cause that has something to do with Africa. When they talk about Africa, the media agencies portray a picture of rampant poverty, malnutrition and a post-apartheid set up. This is the stark contrast of what we experienced in Morocco. Coming from a developing country myself, where people, NGOs and the governmental agencies are working hard to alleviate such third world problems, I was keen and excited about the trip and I was mentally comparing India and Morocco at every visit during our field trip to Morocco, as part of the ESSEC Global MBA. 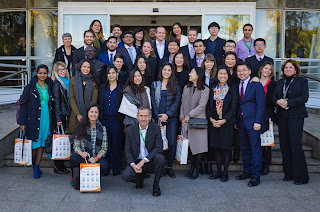 Being part of the MENA region (Middle East and North Africa), Morocco  is the only country that has a blend of African, Arab, Berber and European cultures; Just like India, it is a mix of varied cultures with also a heavy influence of English, French and Portuguese in many parts of the country.
Corporate presentation, managers explaining the success stories and values of the business and selling the oh-so-attractive careers to MBAs – this is what I expected from my visit to Ciment du Maroc, a Moroccan company dedicated to construction materials.

In my apprenticeship during my undergraduate days, I visited cement manufacturing facilities and assisted in audits. I was aware of the dirty tricks of the trade and this “baggage” made me all the more skeptical about the visit. However, the visit completely changed the monotony of company visits I’m used to. 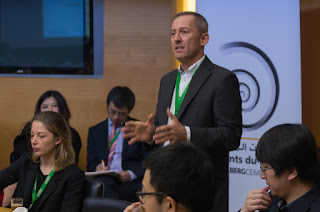 We met with Nabil Françis, the Managing Director, who wanted to address us before the corporate presentation. “It is very essential for you to know the reality of managing an organization. When faced with an ultimatum of which path you have to take, remember that there is right and left, but there is always the choice of going straight”, he began saying.

All the issues he spoke about were basically the failure stories of the company – the turbulent business climate that they operate in, the number of times they have been acquired, the inevitable pollution that cement manufacturing causes and the deleterious effects it has on employees.

One would think that this would have been the most depressing presentation of our lives, but on the contrary, it was the most inspiring story we have ever heard. He did not just admit their past failure: he took ownership for it, and he explained how he overcame all the different problems and emerged successfully, particularly, when he spoke about being acquired by a German company. 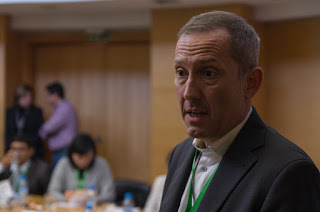 Orders came down to cut staff and change performance review techniques from a human oriented approach to a process oriented approach. Nabil knew that it was not going to easy, but it had to be done to serve a greater good. As an inclusive leader, he confessed the reality of the situation to his colleagues and involved them in the process of transition, rather than assuming the role of supremacy, which is what usually happens in most cases.

Another controversial point of discussion was the harmful effect of the process for the employees – working in the industry causes lung infection for workers who are in close and constant contact with cement. Nabil did not shy away from admitting to the truth. “It is inevitable. Nonetheless, we are constantly striving to spread awareness, increase protective measures and minimize the impact. Even then, it is impossible to alleviate it altogether,” he said. 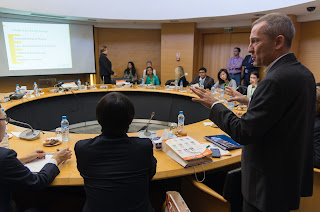 He also told us about how they came up with shredded tires as an alternative material to substitute coal in the production process and also how they have mystery shoppers – something I have never heard of in the cement industry – to analyze the quality and performance of the final product at the point of sales. This illustrates his commitment, involvement and genuine concern for the organization and the people.


Every company goes through all/most of the problems that Nabil spoke to us about and yet they do not want to confess or admit that it is in fact a problem, especially to potential recruits. The honesty in his words is what made him so inspirational - it shows that he’s not a run of the mill Managing Director who is just waiting for his big payday and pretending to be human when he’s really not.


Besides, the fact that he was an ESSEC alumni himself was very reassuring for us – we could see a real life example of the leaders that an ESSEC education breeds! This visit was for me, the highlight of the trip. Even if I cannot exactly apply everything  that was said, I would definitely endeavor to lead like Nabil! 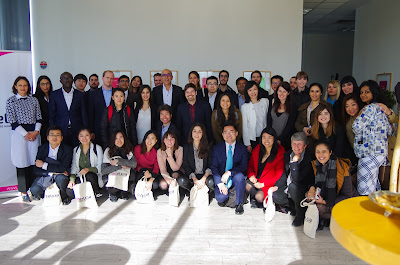 Another fascinating visit we had the opportunity to make was to a company focused in Information Technology, an industry I have always felt is overrated and in which I never want to work in.
We met Karim Bernoussi, the co-founder & CEO of Intelcia, which essentially began as an outsourcing company, and has now become the biggest offshoring company in Morocco. As multinationals flooded emerging markets to outsource customer relations and other parts of their service supply chains, there was a boom in outsourcing. Owing to the English-speaking population, India was usually the most attractive destination. In this context, however, European companies -particularly French-speaking companies- started to look for alternatives. This is when Karim identified a market in Africa for outsourcing. North Africa in particular, emerged as a palatable solution thanks to the cost competitiveness, proximity, language and time-zone compatibility with Europe. 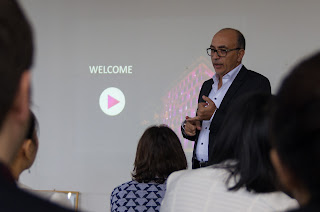 Giving up his top position in Microsoft, Karim Bernoussi founded Intelcia in 2000 - he is a visionary who dared to execute his dream, come what may. In a sense, he was like Steve Jobs in the offshoring industry. The level of challenge for a tech-based company when they are acquired is exponentially higher when compared to a manufacturing company, due to the lower availability of benchmarks or standard procedures to learn from.

Contrary to the case of Ciment du Maroc -which had to adapt to the frequent change in ownership-, Intelcia had to constantly stay ahead of the game. Karim explained that this is why he sought a venture capitalist funding. In fact, Intelcia has acquired several promising companies in the domain to become the leader in offshoring.

In contrast to the case of Ciment du Maroc, Intelcia had a bigger challenge - to accommodate and incorporate the various corporate cultures owing to the several acquisitions they made. Meryam El – Bada, who is in charge of the acquisition of Atento Maroc, said: “Our goal is not to intimidate the company that we acquire, but to welcome their values and ideas and grow together with them.”
I learnt the concept of synergy when I studied about mergers and acquisitions in my graduate degree, but I have never seen a real-life example. Intelcia is one of the few rare cases which comes to close the idea of perfect synergy. Something that we felt during the post-presentation networking was that the company instills a spirit of togetherness amongst the employees. Like Karim said, it is good to have values, but to make values is the health of Human Resource. 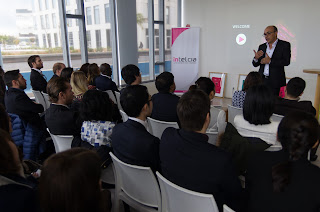 In the end – I thought to myself- IT is not so bad after all!  As the Canadian astronaut Chris Hadfield said: “Ultimately, leadership is not about glorious crowning acts. It's about keeping your team focused on a goal and motivated to do their best to achieve it, especially when the stakes are high and the consequences really matter. It is about laying the groundwork for others' success, and then standing back and letting them shine.”