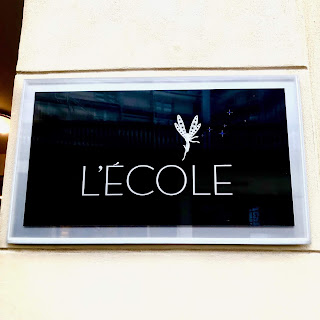 Watch a highlight video of the visit at the end of the article.

For this week’s visit, we toured L’École des Arts Joailliers just off the Place Vendôme in Paris. Opening their doors in 2012 with support from Van Cleef & Arpels, the school is bringing the art of jewelry-making to the public sphere with their classes for jewelry enthusiasts & amateur jewelry designers, their monthly lecture series, and the bi-annual exhibitions. Yesterday, we were fortunate enough to learn about four of the six savoirs-faire and the current exhibit, Bagues d’Homme, which consisted of the majority of art- and furniture-collector Yves Gastou’s personal collection of men’s rings. 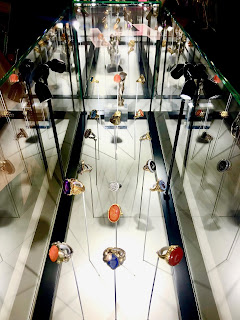 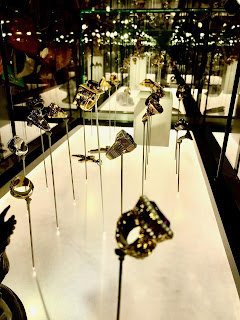 The first half of our visit was conducted by a lovely gentleman, Art Historian Gislain Aucremanne, who is particularly passionate about men’s jewelry. He proved to be just the person to help us explore the exhibit Bagues d’Hommes. The exhibit consisted of a collection of 669 rings from Yves Gastou’s personal collection of over a thousand, which ranged over seven different themes - Neoclassical, Chivalry, Gothic, Religious, Vanities, Ethnic and Curiosities. From some extremely valuable and rare antiquities to rings Mr. Gastou found in tag sales and along his travels, this exhibit offered an extremely varied view of what men’s jewelry means and has meant for cultures across the globe and across generations. Upon entering the exhibition space, we were met with a large statue of Joan of Arc, a symbol of masculinity and femininity in one and a great inspiration for Mr. Gastou who is trying to dismantle the social belief that rings are only for women. For each of the many cases, Mr. Aucremanne explained the significance of certain pieces in terms of Mr. Gastou’s passion for them, the historical importance, and the stylistic relevance. As these rings were created over hundreds of years, the story also followed the men’s fashion trends. In the past, jewelry was an important way for men, and specifically clergymen, to show their power. Over time however, the popularity of men’s jewelry faded as women took over as the predominant wearers of these works of art. Mr. Aucremanne noted for us that in the 1980s and 1990s, rebellious personalities decided to take back the right of wearing jewelry loudly and proudly. A fascinating insight into one man’s dedication and passion for the art of men’s jewelry, this exhibit demonstrated how important jewelry can be to one’s identity.

After our in-depth tour of Mr. Gastou’s immense collection, Mr. Aucremanne had three last pieces of fine jewelry to show us, which stunned us both in the physical design and their individual stories. 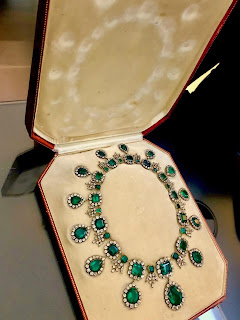 The first was a necklace fabricated in the 1770s in France by a jeweler of King Louis XVI. While it does not currently have any of the original stones, which were unfortunately sold and replaced with glass replicas, the metal elements are completely original. Despite the glass jewels, this is still an unbelievably stunning piece. Mr. Aucremanne was able to tell us about the legend that was sold along with the necklace. During the American Revolution, the owner of the necklace, a Polish Countess, had bid adieu to her lover, a warrior who went to America to help fight for independence from the British. She received word that he was not doing well financially and to that she decided to send the 13 large emeralds, which would have originally been from Colombia, to aid him in him the fight for the 13 colonies. Though as Mr. Aucremanne reminded us, this was of course called a legend for a reason. 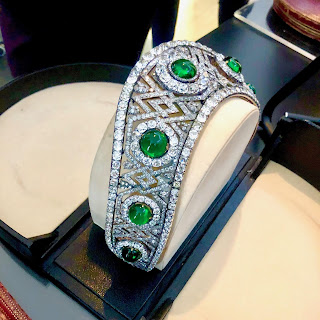 The second piece was a tiara that was first crafted for the wife of Russian Tsar Alexander II. It is stated that the heiress who inherited the piece sold it to a Romanian Queen during the Russian Revolution. Again, as we saw with the first necklace, the stones are now all fakes. It is unknown whether it was sold with fake stones or whether they were replaced after the purchase, though it is known that the Romanian Queen wore it with almost entirely fake stones. 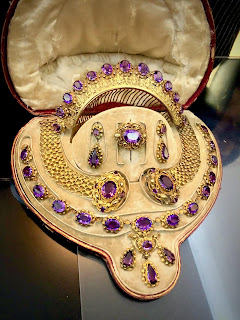 The third and final piece presented to us was a masterpiece set, the acquisition of which Mr. Aucremanne coordinated for L’École des Arts Joailliers. Purchased from a private collector in the United States, this 1830s set, consisting of a modular necklace (that is, various elements could be added or removed), bracelets, hair comb, modular earrings, and a brooch which has since been transformed into a ring. The gold is of very high quality and the stones are amethyst, which at the time of creation was viewed as a more common stone. While it is not sure who exactly would have worn this, it has been determined that it was very probably made for a lady of the court of Queen Marie Amélie. In the piece, we were able to see specific techniques, such as granulation and variations of polishing from matte surfaces to those which were highly polished. Minute details, such as setting designed as fleurs de lis and small flowers separating each of the stones, showed the care and precision that was taken when designing this incredible set of jewelry.

Mr. Aucremanne departed from us as we enjoyed a coffee and some small treats before we ventured into the second half of our visit - the savoir-faire workshop. 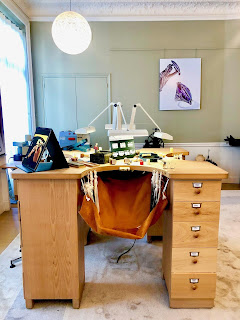 Sporting a L’École des Arts Joailliers lab coat, we entered the classroom, which was set up with four jewelry making stations, for a short presentation on the school & the classes they teach. We then got to work on trying our own hand at a few of the many elements that go into creating the works of art, such as those of Van Cleef & Arpels. 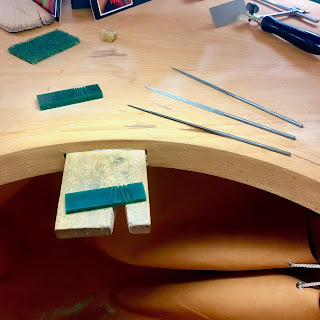 The first of which was forming a wax mock-up, which would then be used to create a mold to cast the initial shapes of jewelry. Our professor showed us a gorgeous wax sculpture of a ballerina and it is clear the absolute attention to detail that is required of this phase of the process. 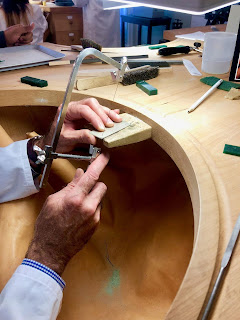 Next we were given a piece of silver to cut along a traced line with a jeweler’s saw, which proved to be more challenging than one would think. The saw looked somewhat like a small hacksaw with a very thin, string-like blade. We were taught about the angle to apply when cutting a straight line versus that which we would use when making turns or curved lines. Given that this would be one of the first steps in the creation of a piece of jewelry, this is a crucial skill to have, which demands a fine hand and an exacting eye. 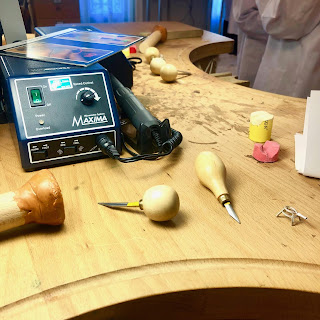 After learning of the wax sculpture and metal cutting techniques, we moved to the next station where we delved into the art of polishing and stone setting. We were given a silver chaton setting, or in English a basket setting, which we had the opportunity of polishing. We used thin strips of cotton and two different waxy materials, one more abrasive than the other, to bring the silver to a lustrous shine. A time-consuming element of the process, the exercise yet again demonstrated to us why some pieces of jewelry can take 800 or 900 hours of work from ideation to completion. Our professor noted something that stood out in particular to me - at Van Cleef & Arpels, they polish not only the visible parts of the work, but every single surface, even those that will never see the light of day after other layers of metal or jewels are added.

To close the workshop, the Master Jeweler who taught us about the polishing process described to us his life’s passion - stone setting. This was something that I already knew fascinated me, mainly for the precision it takes on the part of multiple jewelers. The jeweler who creates the metal base must first provide the stone setters with the initial layout of where the stones will be placed. The polisher must do so without taking away so much material that the stones no longer fit. And finally the jeweler handling the settings must then work with the metal base, all the while being extremely careful not to damage the work that has already taken up to hundreds of hours to create. There are many different fashions of setting stones, one of which is particular to Van Cleef & Arpels - le Serti Mystérieux, the Mystery Set - which was patented in 1933. This remains one of the most iconic techniques used by Van Cleef & Arpels today. 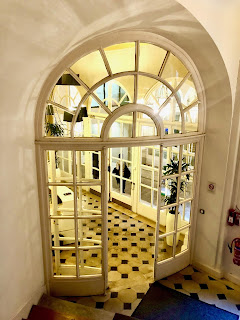 Looking back on this experience, it was a fabulous way for our class to be introduced to the wonderfully talented and eloquent members of L’École des Arts Joailliers, some of whom we will be working with again during our visit to Dubai next spring. We were encouraged to come back to the school any time we are available to continue learning about the very delicate art of jewelry making. I would like to dearly thank all of the members of the school who made this visit possible. We were astonished and incredibly grateful to be welcomed so warmly to L’École. 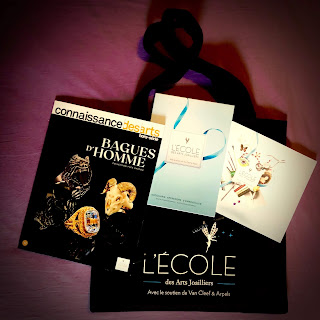