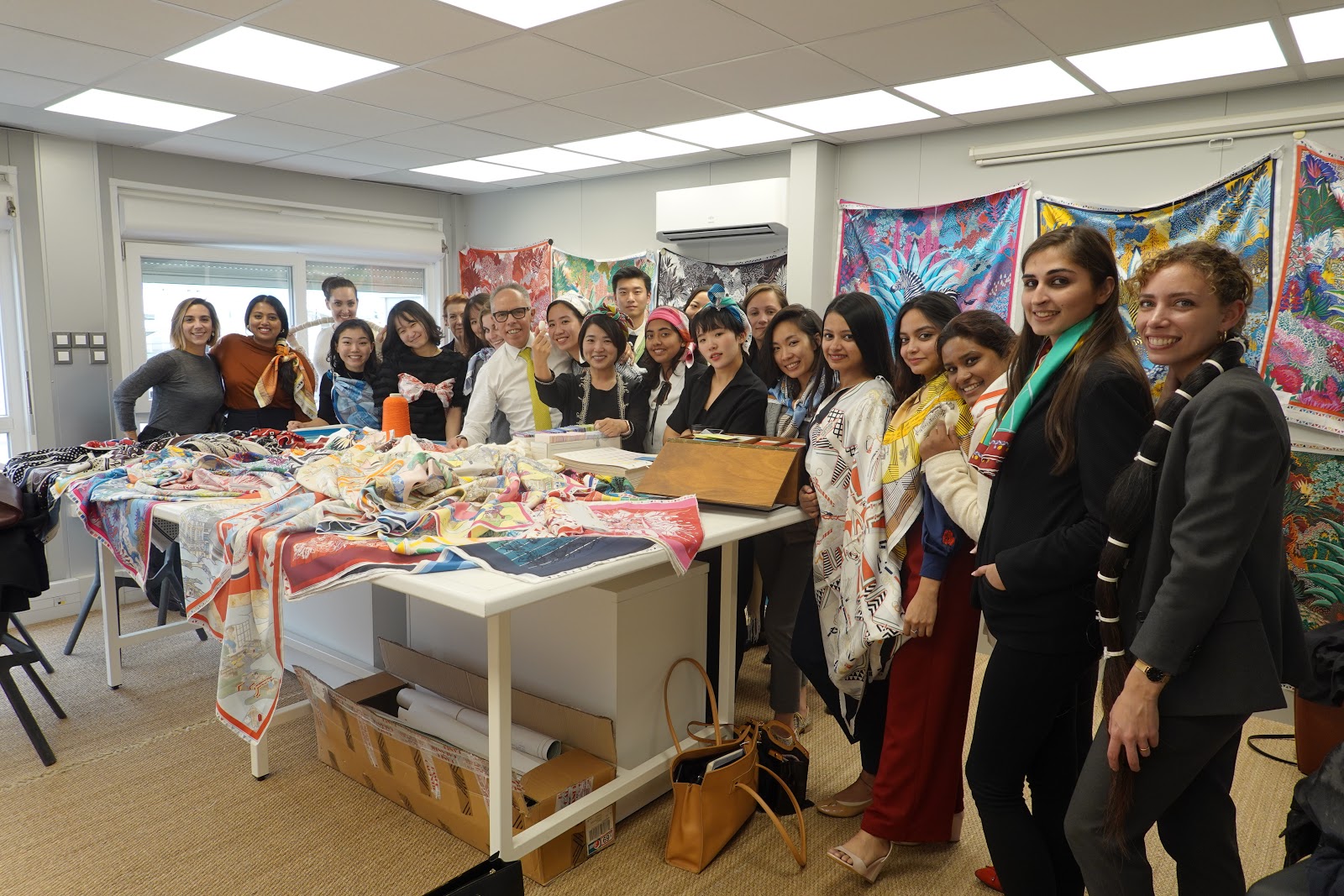 
The visit to the Holding Textile Hermès was perhaps the Savoir-Faire Conference that our entire Luxury Brand Management cohort has been waiting for. For the first time in the history of the program, we had the opportunity to witness how the famous Hermès scarves (also known as Hermès Carrés) are produced.

Watch the highlight video from the visit at the end of the article!

We began our day bright and early for our train to Lyon, where the Holding Textile Hermès is located. The visit started with an introduction to the history of Hermès. Hermès is a luxury brand known not only for its leather goods such as its Birkin bags but also its iconic silk scarves, which were to be the main focus of this visit. The visit was a great opportunity for us to rediscover the brand, learning about its brand identity and values and understanding how its range of product offerings has evolved over the different generations. 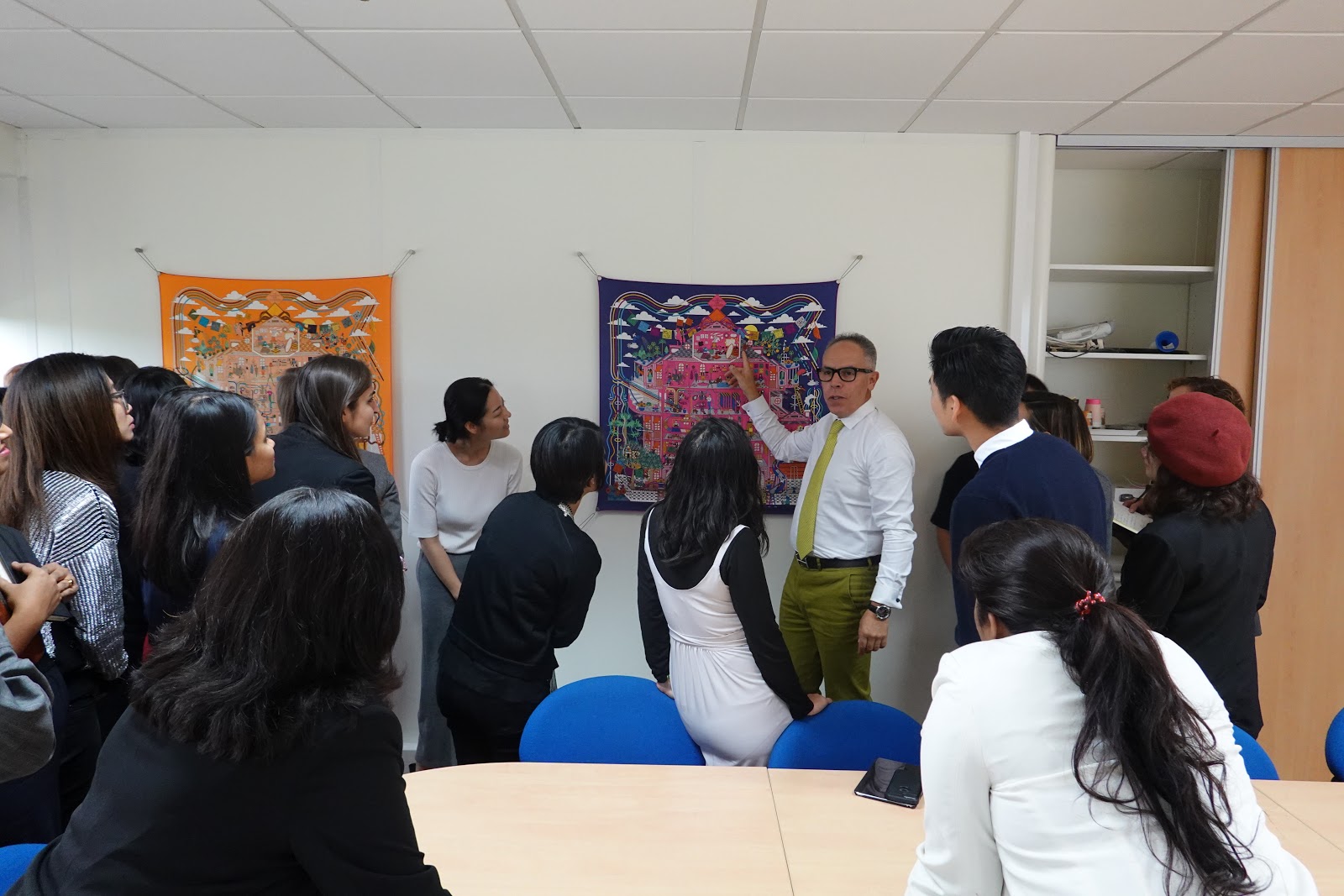 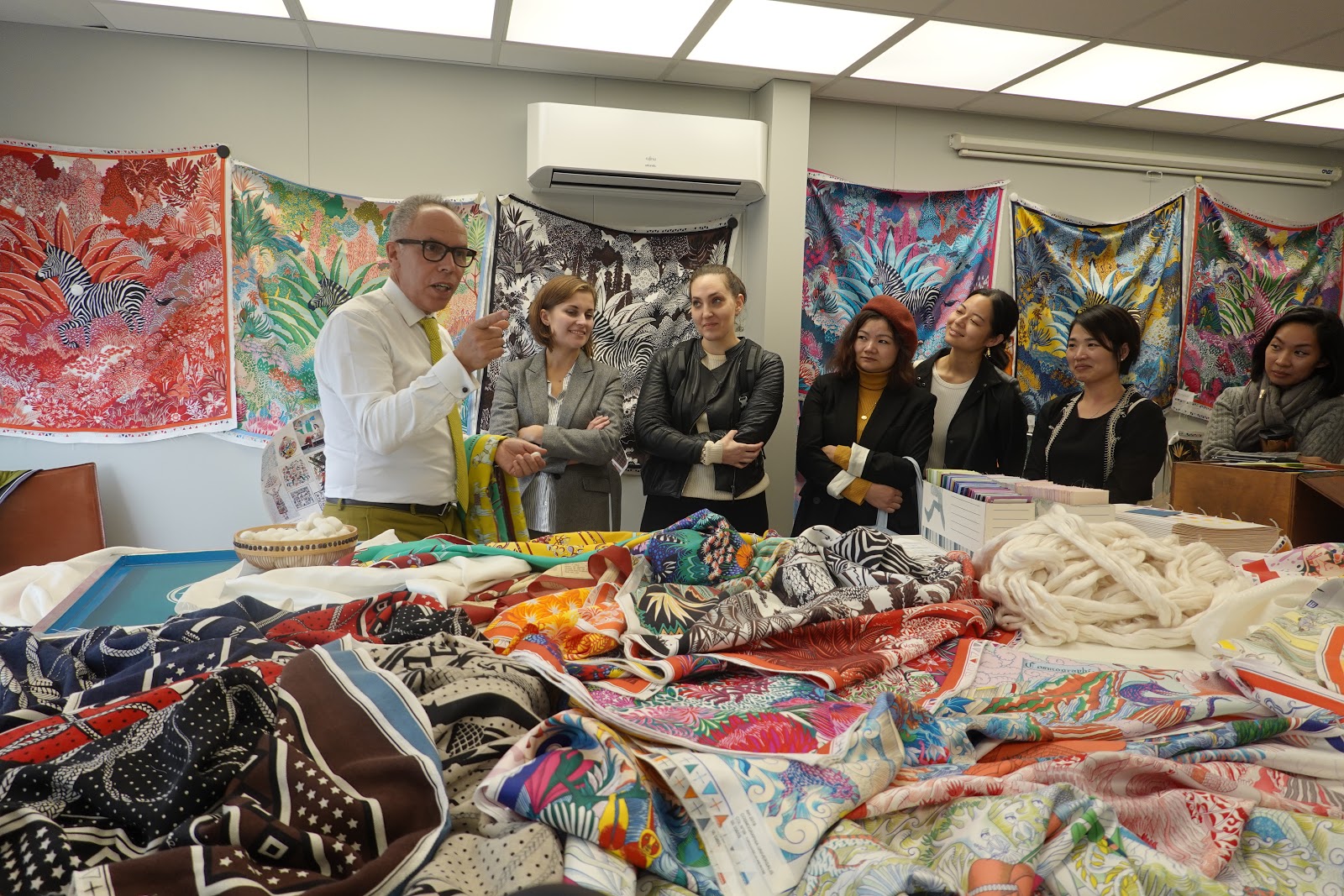 Our key takeaway from the session was certainly that Hermès is a brand that respects time and quality. We were awe-inspired to hear about the time required for a product to be completed from the production of the raw materials needed till the product is ready for sale in a boutique. For example, a carré scarf takes 2 years to produce - from cultivating silkworms for the production of silk which takes approximately 1 year to 6 months for working on the design and 6 months for engraving, it is a time-intensive process. Understanding the various steps allowed us to understand the true value of an Hermès scarf and why they are such prized possessions for many.

Learning about the family tree of Hermès helped us understand the brand on another dimension, seeing how the passions of each CEO influenced the product offerings of the company. Through the visit, I realized how this family business has enabled the one and only luxury world of Hermès.

The company also respects the community built around the business in the local region. It keeps a keen eye on every process by keeping the business size compact, working closely with the ateliers for every detail and step of the creation and production process. We also saw how the company recognizes and appreciates the contributions of each person involved in the production process, for instance regarding their suppliers as partners. 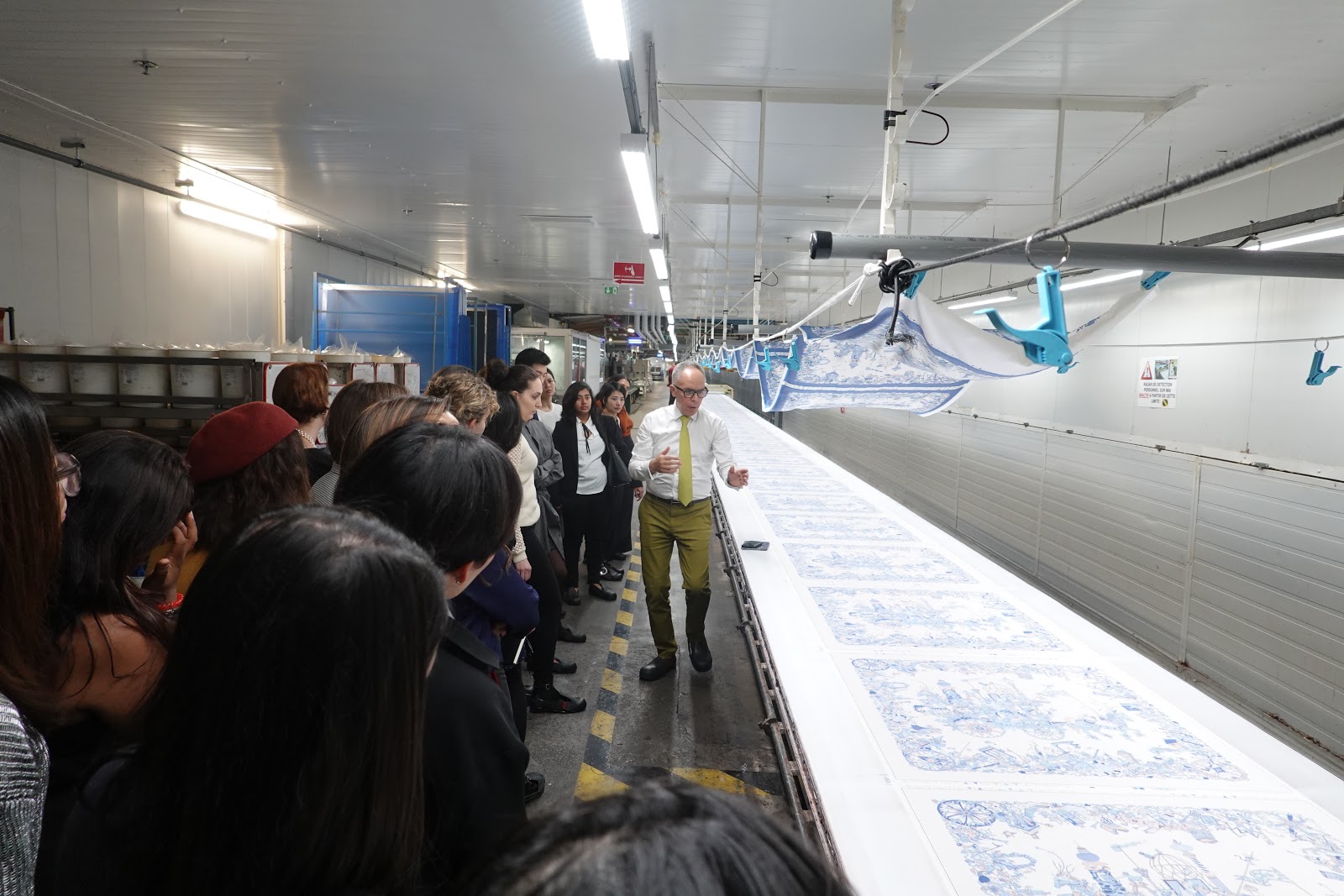 The company uses the screen printing method, also known as “méthode lyonnaise”, a printing technique where a mesh is used to transfer ink onto a substrate, except in areas made impermeable to the ink by a blocking stencil. One color is printed at a time, so several screens can be used to produce a multicoloured image or design. (Source: Wikipedia). At Hermès, this can mean up to 46 screens for 1 single scarf which contains 46 colors identified by the engraving artist.

The process begins with the engraving artist painstakingly identifying and tracing one layer of each color they have identified. Screens are then created based on the traced areas of the design, with 1 screen for each color. A different team then prepares the ink based on the color recipes. The silk will be set on a 150-meter-long table where machines will color the engraved parts in layer after layer. After coloring, the silk is aired to let the colors dry and then to be steamed for the colors to be firmly stick to the silk. These production procedures were all done with the help of cutting-edge machines which Hermès have developed specifically for its needs. 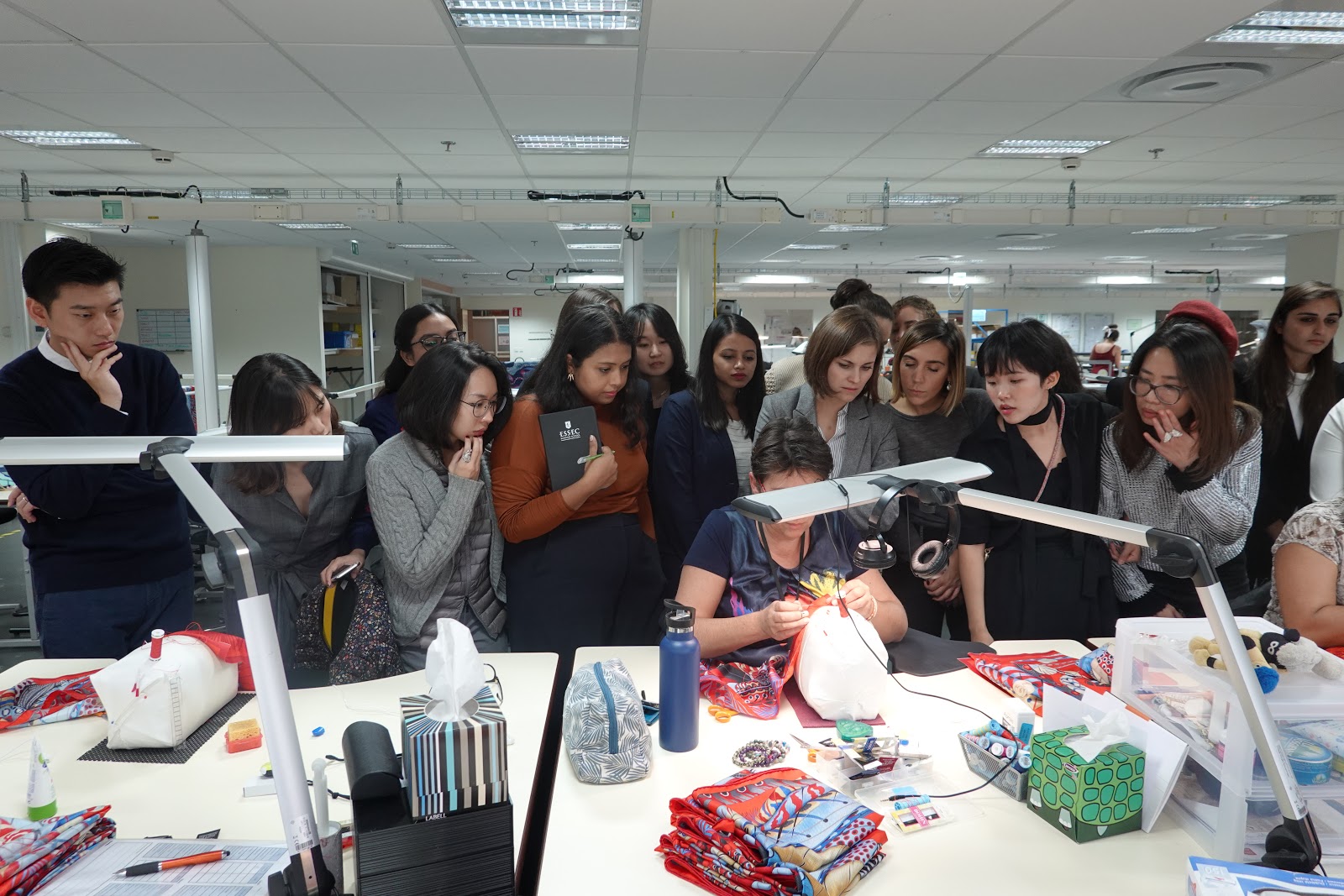 However, as Hermès is a brand built on the foundations of craftsmanship, the human touch continues to make a difference in the production process. From folding the colored silks from the machines while ensuring there are no creases, to finishing the scarf with a rolled seam using the hand-rolled hemming technique, and last but not least the intricate quality checks, the craftsmen spared no expense in ensuring the quality of the Hermès Carrés being produced at the Holding Textile Hermès. Coming from the Luxury Brand Management major, getting to see these masters working was an amazing experience, allowing us to understand and further appreciate the savoir-faire that goes into the creation of a luxury good.

Our lesson learned from the trip was that no luxury good is made within a day. Respect for the savoir-faire, the time it takes, the people and community contributing to the process, and most of all, quality over everything, is integral for ensuring that luxury companies continue to produce products of the finest quality.