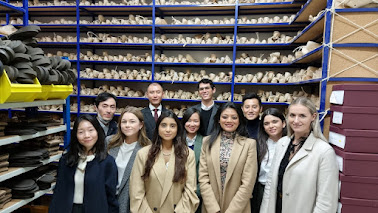 As part of ESSEC’s Global MBA in Luxury Brand Management, students are invited on Savoir Faire visits to historically important companies, workshops and ateliers across the various industries that make up the luxury sector. Most recently, the iconic men’s shoemaker (over 100 years in existence) to the royal family, John Lobb opened up its Paris-based doors to the 2022 cohort. The class was given a hospitable introduction by the company’s CEO, Philippe Gonzalez followed by a privileged and informative walkthrough of the atelier for bespoke shoes (according to Gonazalez, the most complete atelier of bespoke shoes that exists in Europe today) by John Lobb’s Director of Bespoke, Patrick Verdillon. 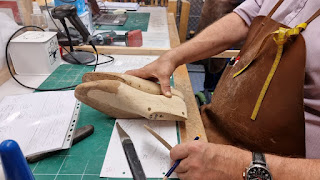 After briefly recounting his journey from working at Hermès overseeing textile production in Lyon to becoming CEO of John Lobb in 2018, Mr. Gonzalez described today’s challenge for the men’s shoe brand. The company has a strong brand embedded in heritage and savoir-faire, but needed to focus on communicating its core values. As he explained, providing a vision of where the company could go in 10, 15, 100 years as well as pushing forward the company into modernity and contemporaneity is his priority.
As CEO, Mr. Gonzalez covers every aspect of John Lobb’s business objectives: design, development and production of the product; sales and after sales; and communications around this ambition throughout the company. With 22 stores globally, including a newer store on the Chinese online retail platform, JD.com, John Lobb is a relatively small company. The core values of the brand include quality of the product (the leathers are natural leathers not covered by any coating and in this way, John Lobb differentiates itself from most other shoemakers), and sustainability, as they produce shoes that will last forever (if you want them to be repaired, you can get them restored). John Lobb’s new store concept on rue François- Ier takes these brand values further by embedding them in the boutique’s interior furnishing: a central capsule carries the values of durability, repairability, by request customization of product, and back to bespoke. Ultimately, Mr. Gonzalez explained, the brand needs to evolve towards a more casual outlook while maintaining its loyal customer base and that is through an emphasis on style over fashion, that John Lobb will realign the brand’s values towards this objective. 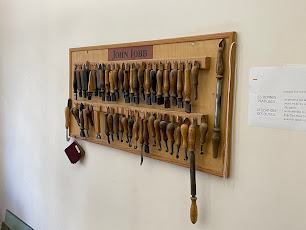 Following this introduction, Director of Bespoke, Patrick Verdillon provided the class with a comprehensive history of the company's origins, which began in 19th century England and opened up its first workshop in France in 1902. Next, Mr. Verdillon walked us through the atelier where its 15 employees make the “haute couture” or bespoke line of its shoes where it takes 6 months for the first pair of shoes to be made. After showing us the process of how a shoe gets made, including where the wooden lasts (three-dimensional moulds shaped like the negative of the bespoke boot) get made and stored, the class was joined by John Lobb’s relatively new Director of Communications, Pierre Alexis Corson who touched on the brand's communications strategy. Mr. Corson explained that the focus was to create bold campaigns and images, bringing wittiness and a sense of humor to the brand. Communicating their own tenets of sustainability has also been tackled through an emphasis on shoe care, which presents itself physically within the new store concept. When balancing between targeting the new generation and brand heritage, he explained the team makes sure not to go too fast in one direction. For now, he is confident with how the brand has been communicating and indeed the natural traffic to their website, which increased by 60%, is indicative of the communication strategy’s success.
At the end of the visit, Philippe Gonzalez came back to conclude with a statement on what makes a good CEO, explaining that the vision of the company and brand ultimately can not exist without a team, a good dose of humility and an understanding and appreciation of people. Otherwise put, it is the product that is the star in the company and the people who keep it alive. Seeing the dynamic components of the atelier and getting an understanding of what it takes to execute the big picture challenges and objectives outlined above could not better support Mr. Gonzalez’s concluding insight.
Learn more about the Global MBA in Luxury Brand Management
Talk to the Global MBA Admissions Team
Posted by ESSEC Blogs