To understand Luxury is to decode the history of the most powerful luxury brand in the world – LVMH and what better way to learn about LVMH than to visit the founding house of Louis Vuitton. As part of our savoir faire visits, the ESSEC GMBA’23 team had the wonderful opportunity of visiting the LV Atelier at Asnières-sur seine where we were personally guided by Mr Thierry de Longevialle on the brand’s history and legacy. 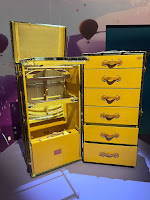 Born to a poor family in the east of France, Louis Vuitton decided to move to Paris on foot and found his place in this iconic city as a packer. Under the tutelage of Monsieur Maréchal and after 17 years of apprenticeship, Louis decided to start his own business as a trunk maker in 1854. As success followed him, he looked to further expand his business and in 1859 built the beautiful Atelier at Asnières-sur seine, which continues to be the core facility that trains the master craftsman of the house.

Starting with the business of trunkmaking, LV soon began to transform the luxury industry and became the first brand to display brand logos with their infamous Monogram Canvas.

The GMBA cohort was later shown a documentary of the work done at the atelier along with a tour of the museum which showcased some of the brand’s original trunks. These original pieces, although strong and sturdy on the inside, still reflected the wear and tear of life on its shell, which the house beautifully describes as “the life of the luggage”. A true example of how heritage can only fortify the brand with the passage of time.

Louis Vuitton had centered his brand around creativity and innovation, and unbeknownst to him, set into motion events that would give birth to the leader in luxury today. Although the day had come to an end and we had to bid adieu, we left knowing we had just experienced an opportunity of a lifetime and with our very own LV memento to remind us of the journey of our journey here.