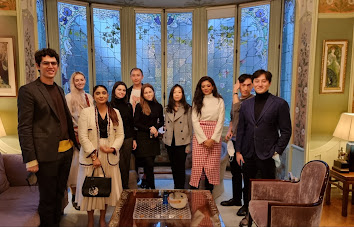 Last year, marked the 200th Anniversary of Louis Vuitton’s birth, the founder of the eponymous luxury house. To mark his bicentennial, Louis Vuitton, the namesake brand, has gone out of its way in paying rich tributes by way of a documentary, fictional novel, art piece, creative installations, and the iconic Louis Vuitton trunk makeovers. How could we at ESSEC’s GMBA Luxury Brand Management, miss out on the fun then? As part of our program’s ‘Savoir Faire’ site visits, this time we were invited to the Atelier Louis Vuitton at Asniere-sur-Seine, the iconic mansion where Louis Vuitton once lived and which today also includes next door a museum and limited editions workshop. 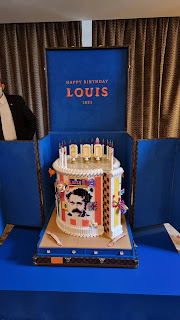 The moment we arrived, we were guided on a private tour of the house by its Director, Mr Thierry de Longevialle. We were told that the Maison is not open to the public, so it was a great privilege that we got to see the beautiful house for ourselves, while we participated in a detailed conversation with

Mr Longevialle on brands history and how the founder and then his son, George Vuitton, led the Luxury house to great heights. We were drinking in the interesting anecdotes and information with the refreshing drinks that we were served; the excitement level clearly building up for the next phase of the tour.

We were then led to the Atelier, where the exhibition to mark the founder’s bicentennial was set up. All around us, the iconic Louis Vuitton trunks had been given all kinds of makeovers by international artistes, as diverse as the K-pop group BTS, to stylist Ibrahim Kamara, to long term collaborators such as Alex Israel and Stephen Sprouse. Our senses were on an overdrive as we saw all shades of kitsch to classy, to artsy, to understated art on the trunks. We were given a thorough tour of the exhibition by a Guide who narrated interesting stories behind each piece of art. We took our own sweet time observing each trunk, taking pictures, and taking in the vision of its artist. 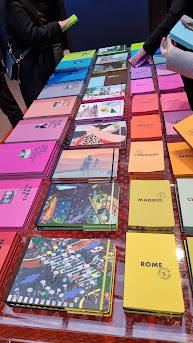 After this exhibition, we were ushered to the small in-house cinema, where we relaxed into the plush chairs, and watched a beautiful documentary on the craftsmanship and skills that goes into making a Louis Vuitton trunk the icon that it is. Just seeing the minute attention to detail and the rigorous craftsmanship that goes behind making these luxurious items that have a legacy of their own, was so enriching. We came out of the theatre room, with so much more appreciation and awe for the craftsmen above anything else, for they are the creators and the grassroots of this historic and iconic brand.

Our next stop was the quaint bookstore, with an almost quirky look, with Louis Vuitton city guides lined up in all of the rainbow hues. We were spoilt for choice as we shopped for city guides, glossy coffee table books, and even unusual posters. By the time we had finished our shopping, we were told that finally it was time to wind down our visit. Even though we didn’t want to, we had to bid adieu to the lovely people at Atelier Louis Vuitton, who gave us such an enriching afternoon with their warmth and hospitality. This one was for the keeps!